Home WHAT IS DOWN SYNDROME?

WHAT IS DOWN SYNDROME?

More and more people know that Down syndrome (also known as trisomy 21) is caused by an extra chromosome in a person’s genetic code. But what actually causes it, what is and isn’t Down syndrome?

What are the causes of Down syndrome? 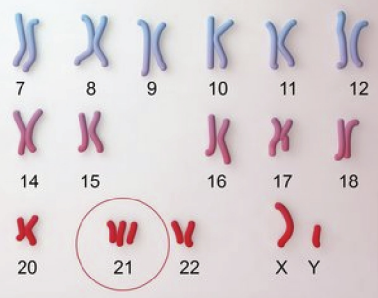 Generally speaking, at the beginning of pregnancy cells begin to divide, but in the second or third phase of meiosis, inhomogeneous separation of chromosomes occurs. The cells then continue to divide and multiply, copying this genetic code. And while scientists now know why, they still don’t understand exactly what causes cells to divide in this non-specific way. There are risk factors (age of the parents, level of stress during conception), but there are no definitive answers to them either, as science and medicine observe enough exceptions to them. Even the heredity factor is now considered invalid, as there are pairs of parents with Down syndrome who have perfectly healthy babies.

What makes people with Down syndrome different physically?

The external signs of the syndrome are clearly recognizable – since infancy, the eyes are almond-shaped, the palms have a single fold line, the face is flatter than usual. Children with Down syndrome grow more slowly than their peers, often have lower weight and height, shorter necks, larger tongues, low muscle tone, extremely mobile joints. Despite the commonalities, visual markers vary greatly from person to person – just as we are all different. Down syndrome often affects the heart and digestive system. All these symptoms, however, are extremely well affected by proper exercise, patience and love.

What makes people with Down syndrome different mentally?

Most people with Down syndrome have cognitive problems with short-term and long-term memory, late speech, delays in the development of gross and fine motor skills. However, working on these skills significantly improves children’s abilities, they also learn, develop and progress, but at a different pace than their peers.

What is Down syndrome NOT?

We can safely say that we are living in the best time ever for people with Down syndrome.
Parents have enormous access to information about developmental exercises, speech therapists, therapists and teachers. Social networks introduce us to more and more people with Down syndrome in various fields of work – from positions such as barista or chef, through rhythmic gymnastics and swimming, all the way to models and artists.

Do you know what the main difference is? That these people were believed in, supported, accepted and helped along the way. Is this actually a difference? Don’t we all have these necessities in order to grow and develop? When it comes down to it, people with Down syndrome aren’t all that different.

And if we allow ourselves to think in this way, surely both their and our development will accelerate significantly. Acceptance, support and belief – the three components that are vital for everyone.

This website uses cookies to improve your experience. We'll assume you're ok with this, but you can opt-out if you wish. Accept Read more